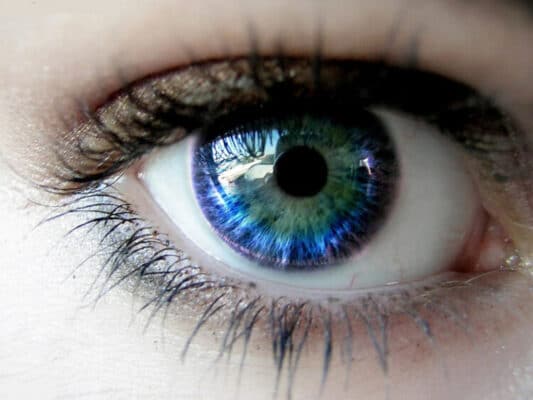 Can eyesight be improved or even restored by exposing our eyes to 670nm deep red light? New research has made this idea very trendy, but it is only the tip of the iceberg. Let’s bring some clarity to this topic!

Our modern environments are deficient in natural light. We spend much of our lives inside, and for many people the most consistent source of light is the blue light of their phone or computer screen. Blue-blocking glasses and software like f.lux are common steps taken to compensate for the inadequate exposure to blue light. Unfortunately, the truly protective part of the light spectrum, the red-orange portion, which can be vividly experienced at dawn or sunset, is missing from most people’s lives.

Red light, as it turns out, is fundamentally important. It modulates cellular respiration (the production of energy) in the mitochondria. It is hard to think of something more important than the production of our energy by our cells, truly the foundation of life, and thus, health. The relative deficiency of this type of light, particularly relative to the harmful effects of blue light, is probably a contributing factor in many common pathologies, including eye conditions. (1)

“Old observations such as Warburg’s, that visible light can restore the activity of the “respiratory pigments”, showed without doubt that visible light is biochemically active. By the 1960s, several studies had been published showing the inhibition of respiratory enzymes by blue light, and their activation by red light.” (2)

Half a century ago, the crucial symbiotic relationship between light, hormones and health was already being researched, but it seems that over the ensuing decades, this research area became somewhat neglected. In recent years, however, a blossoming field of science has explored the potential therapeutic effects of red light therapy (also referred to as photobiomodulation, or LLLT). The results have been truly staggering, with benefits of red light exposure found for seemingly every ailment known to man. (3) Notably, red light appears protective for various eye conditions, including age-related macular degeneration, corneal injuries, dry eyes, light-induced damage, glaucoma etc. (4)

To understand how red light could benefit eyesight, it’s important to consider the retina, the innermost, light-sensitive layer of the eye. Like all tissues, the retina relies on the mitochondrial supply of ATP (adenosine triphosphate), the fundamental factor which fuels biological energy. To meet the high energy requirement of visual perception, the retina’s photoreceptor cells are extremely rich in mitochondria, the “engines” which generates ATP in the cell. (5) Because of this high requirement, the generalized loss of mitochondrial efficiency (rate of energy production) seen in aging becomes relatively more significant at the retina in comparison to other, less metabolically-active tissues.

Mitochondrial decline is the fundamental feature of aging, and is driven by the cumulative effects of stress on the organism. It can be noticed in all human tissues. The age-related decline in eyesight is merely one of the major symptoms of this process. That being said, red light therapy has been shown to be able reverse this condition, by restoring the mitochondrial efficiency to the photoreceptor cells of the retina. A 2014 study found that 670nm* deep red light (or near-infrared) increased ATP levels in the retina of aged (12-month old) mice. Moreover, acrolein expression was also reduced. This is important because acrolein is a free radical marker of oxidative stress and is unregulated not only in macular degeneration but also in cognitive diseases like Alzheimer’s. (5)

Other studies (6, 7, 8) have since confirmed the benefits of 670nm deep red light in increasing ATP in the retina of aged mice, but also in delaying the photoreceptor loss that occurs with natural aging.

“ Our data suggest, 670 nm light can significantly improve aged retinal function, perhaps by providing additional adenosine triphosphate production for photoreceptor ion pumps or reduced aged inflammation. This may have implications for the treatment of retinal aging and age-related retinal disease, such as macular degeneration. “(6)

These results have now been replicated in several human studies. A 2017 study on patients with age-related macular degeneration (9) found that 670nm deep red light, when combined with other light frequencies of the orange and infrared ranges (590 and 790nm), led to improvements in visual acuity. A more recent study (10) has also shown 670nm red light therapy to be effective in improving eyesight in patients over 40 suffering from age-related decline in eyesight. Notably, red light had no effect in younger patients, but led to improvements in the ability to detect colours and to see in low light for people with declining vision.

It’s important to note that 670nm deep red light is not the only therapeutic light frequency. Several others studies have found benefits for eye conditions with treatment at other frequencies, including 633nm (11), 780nm (12), and others. This probably reflects the natural balance of protective effects from the red-orange spectrum of sunlight. In general, 670 deep red light seems to be a particularly therapeutic light frequency. However, it may be even more potent when combined with other parts of the light spectrum, in a way that mimics natural sunlight. Bottomline, red light therapy, at a variety of light frequencies, has been shown to be an extremely effective, safe and affordable form of treatment.

The next reference is truly an incredible resource, an ongoing project started by the incredible Vladimir Heiskanen: a spreadsheet which compiles studies pertaining to photobiomodulation. There is a significant section specific to eye conditions.

Retina picture by rdowns from Pixabay

Sunset image by by ixnet from Pixabay