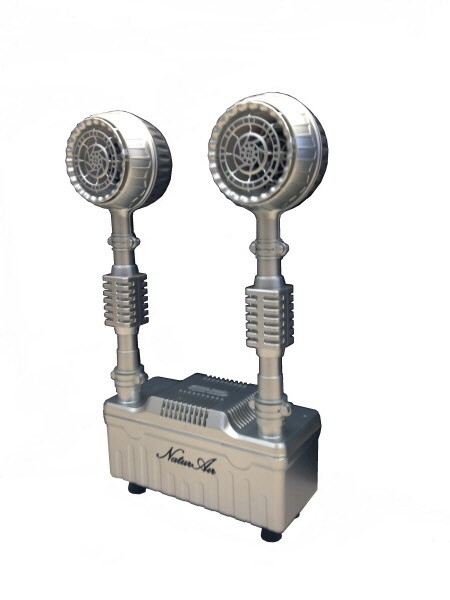 *Please consider this information before purchasing the Pro version. Naturair recommends anyone that has never used an ionizer to first purchase the regular non pro "Twin Air". The Pro version puts out an incredible amount of negative ions and needs a lot of open space to do this. The non pro version is better suited for newbee's and for people with small rooms and with rooms where electronic devices would be a concern. If you have a big room that is at least 12 by 12 feet, and high ceilings only then should you consider the pro version. We feel the regular twin air non pro is probably going to be suitable for most people to start with. Naturair says most people go with the Pro version and we understand that people want the one that puts out the most negative ions. We just feel that the Pro version might be too much for some people to start with, especially if you have a small room.

Here is what Naturair advises:

"It is incredibly strong(Twin Air Pro) and if you have never owned an ionizer please think twice before buying this one (Our Twin Air would be a better option). Please ensure you read the instructions that come with it prior to using it. It is much stronger than our previous 2017 version of the Twin Air Pro."

The wise decision would be to start out with the non pro version. We want you to be super happy with your purchase and to have the most optimal circumstances for you to achieve better health. And even though the non pro version puts out less negative ions then the pro version, it still puts out an incredible amount of ions and way more ions then most other units on the market.

***Please make sure you read all instructions carefully to get the most out of your ionizer. The negative ion generator must have clear space around each side of at least 10 inches and must face the open air so the ions can flow freely. Ionizers should not be placed within 3 feet of electronic devices like laptops and tv's and the front should not directly face them up to a distance of 6 feet.